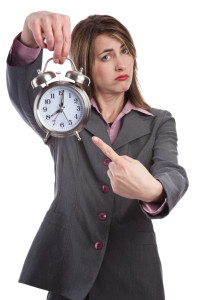 Punctuality came to mind last week as I was racing down the road to get to an appointment, I had a sudden revelation. This is not uncommon for me. It has become a regular occurrence. I am never late–well, almost never, but I often arrive at meetings or appointments with only moments to spare.

Living in beautiful Savannah, Georgia, I am aware of what we call “Savannah time.” Few people arrive anywhere early. Most show up exactly at the appointed hour. Others wander in at their leisure, with an apology or an excuse, but late all the same. I feel myself on the verge of becoming one of the band of late-comers.

I tend to think I can get one more thing done before I leave for the meeting or event. For example, if the phone should ring just as I am headed for the door, I can’t resist answering it.  Good old-fashioned curiosity. By the time I get in my car and check the dashboard clock, I realize that if I am lucky and all the traffic lights work in my favor, I’ll be on time.

In a recent blog I wrote about developing good habits for 2018. The habit I need to work on is joining the punctual people. That doesn’t mean arriving just in the nick of time. It means following the advice of the late Vince Lombardi who said, “If you are fifteen minutes early, you are on time. If you are on time, you are late. If you are late, don’t bother to show up.” In Wisconsin they call that “Lombardi Time.”

From now on my goal is to arrive fifteen minutes early. Certainly no more than that because I don’t want to intrude on those setting up the meeting or managing the event.

Punctuality is critical to good business relationships. People who are late send a message that they don’t value other people’s time or that they have more important things to do.

Think how you are viewed when you don’t make the effort to be on time. Do you want to be seen as inconsiderate or self-important? That certainly won’t help you grow your business or represent your organization in a professional manner.

Here a few tips to help you with your punctuality and to keep you on “Lombardi time”.

Join me in vowing to be on “Lombardi Time” from now on. Old habits are hard to break, but what better time to start than early in a new year?

This article first appeared in the Savannah Morning News.