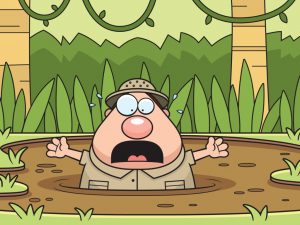 It was yesterday afternoon. I found myself in the middle of a technological quagmire with no way out. I felt like I was playing out a scene in a mid-1940’s Western where the victim is being swallowed up in quicksand. As I struggled to free myself, the phone rang. I hadn’t dialed 911. 911 was calling me. Woohoo, it was my technologically savvy friend Jerry Gitchel. How did he know? Had the universe sent him some sort of signal?

Sensing both panic and despair in my voice, he instantly asked what was wrong. I told him that I had been trying for hours to resolve an issue that I had no business even considering. It was, as they say, way above my pay grade. In typical Jerry Gitchel style, he instructed me to put down my mouse and back away from the keyboard. Help was on the way. Two plus hours later, I was out of the pit. Problem solved.

This was not the first time Jerry has come to my rescue. Not only did he handle my issue with his usual expertise , he managed it with an incredible amount of patience. To top off, when he finished, I understood what he had done so that the next time I find myself in this mess, I will be able to resolve it alone. Okay, Maybe.

Jerry’s gifts include not only his technical skills but also his extraordinary ability to explain it in down-to-earth terms. He doesn’t talk in techno speak; he uses real words.

The next time you find yourself stuck in a technological mess, contact Jerry. You will walk away from your crisis with a clear understanding of what happened and what to do to fix it.  Best of all, Jerry will leave you with a step-by-step plan to get unstuck all on your own. What gifts. What a friend. Thank you, Jerry.

Jerry is President of Leverage Unlimited. Jerry has a special knack for helping business owners and professionals understand and address the overwhelming challenges and frustration brought on by the digital age.

One thought on “I was stuck…”